I've mentioned this chap before and now he's finished and photographed.  Lucius is an absolute blast to paint, lots of detail and loads of different elements to keep you interested.  I've noticed on a few forums that he's not a popular model, which I've always found a bit strange.  He's always felt like an "old school" chaotic model to me - cloven hooves, faces coming out of his armour, a whip and a creepy face - what's not to like? 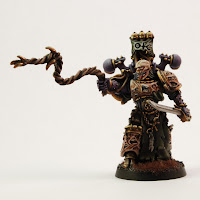 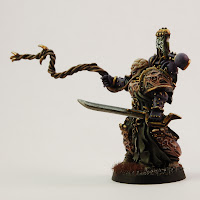 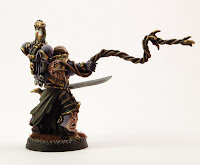 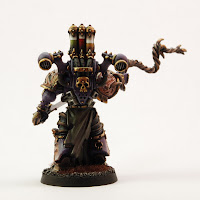 I haven't gone for a strict Emperors Children colour scheme, as I'm not a big fan of the black and pink, but I think he looks Slaanesh-y enough.  The green isn't really a Slaanesh colour but I think it works well with the purple and gold.  I'm really pleased with the faces in the armour, which used Dheneb Stone as a base colour and then washes of Ogryn Flesh all over and Devlan Mud in the more shadowed parts, then highlighted back up with Dheneb Stone.
I spent a lot of time on this model, particularly:
All the extra effort has been worth it, and I'm really pleased with the way he came out.
The pictures were taken in using my new photo box, built to Tentakel-Spec.  I've not had to do any processing of the images on the PC except for cropping, which is a big plus for me - I really wish I'd built one sooner.
Of course a big thank you to Big Al at Hogs of War for a superb Christmas present!
As always, comments and criticism more than welcome!
Posted by Unknown at 22:46