A quick update, another Berzerker, plus an Empire Soldier

Not much of an update, work, plus World Cup (and the pain of being English), plus a trip to London has eaten into my hobby time these last couple of weeks - off to Hard Rock Calling festival this weekend, but after that I should be back into the swing of things.
First up is a Khornate Berzerker icon bearer I'd been working on - same colour scheme as the test model from a while back. 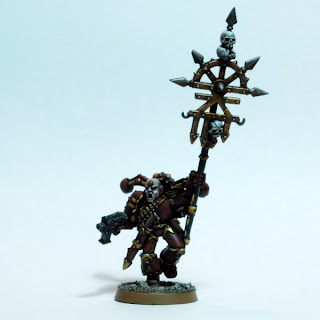 Another reclaimed and stripped job (I think he cost me £2) - I can't stand the icon that came with that miniature, so I replaced it with the Khorne icon from the Chaos Space Marine box.  I think it works pretty well.
Next up is a test Empire militiaman/mercenary, part of my Witch Hunter themed Empire force.  A real quick and dirty paint job, I wanted to hark back to 3rd edition Empire, with a stripey pattern on the trousers. 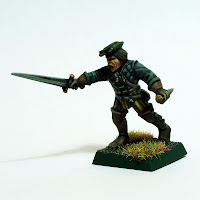 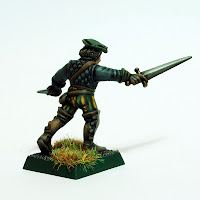 He won't win any competitions, but if I can get a few more of these guys painted up, he'll look pretty good on the table top.
As always, comments and criticism welcome!
Posted by Unknown at 21:55 2 comments:

I've been thinking about doing an Eldar army on and off for the last few years, mainly due to the rather cool looking Ranger models.  I bought the Ranger box a while back and got one painted: 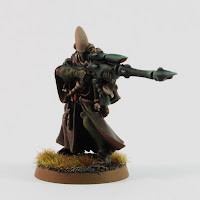 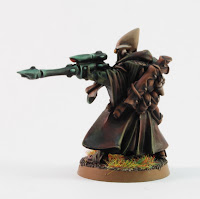 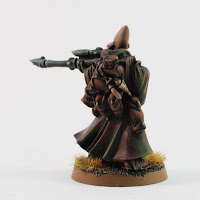 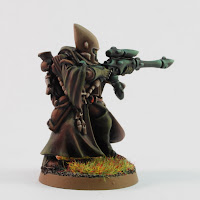 The worrying bit is I'm not exactly sure how I painted some of him, so I'm going to need to go through some trial and error - D'Oh!  One thing I might do with this chap is repaint the gun - I'm not entirely happy with the shade of green, and I'm thinking about black highlighted with a dark brown instead.
So this chap got me thinking about an Autumnal/Arboreal themed army.  Yep, "Wood Eldar" - it's probably been done to death, but I like the idea, and I haven't seen anyone do it locally.  The standard Guardian colour can just about be seen on the chap above - brown body and khaki helm with black/green faceplate.
I've knocked up a quick 500 point army list - I very much doubt it's competitive, but it's got a bit of variety in it, and should be good fun to paint.
So far I have the Rangers (1 painted) and the Autarch - a second hand, soon-to-be-stripped Asurmen model, minus the back banner (I'm not really a fan of back banners to be honest).  I was thinking about a very dark green for the Dire Avengers to tie them into the woodland theme.  The Fire Dragons would be a muted orange with Bestial Brown as the base colour, and the Striking Scorpions would be more of an olive drab shade of green.
This is a "project for the future", so I'll be painting the Rangers occasionally, while I get rid of the backlog...
In other news, I actually got a game in at the local GW store!  For those of you who know me in the analogue world, yes that is the first time in over 12 months...
750(ish) points of my Crimson Fists joined some Dark Angels and Imperial Guard up against Eldar and Tau in a 3 person and 3,000 points a side battle.  We lost due to the forces of humanity forgetting about objectives, but Brother Captain Mortis did himself proud before falling to some Shining Spears.  I'd forgotten how much I enjoyed the games, so I'm hoping to make it a regular Sunday afternoon thing.
Posted by Unknown at 22:40 6 comments:

I'm going through an "irritable" stage at the moment, it doesn't take too much to annoy me, and there have been more than a  few days these last couple of weeks when I wish I'd never got out of bed.
Painting has been slow this last week or so, I've managed to complete two miniatures.
Just the two.  I've got into a painting rut again, the enthusiasm has died and I'm not sure how to regain it.  Nothing much appeals to me at the moment, and it's a bit worrying.  I'm tempted to just put everything to one side and start a new project, just to get the energies flowing again.
The next source of irritation is my lack of a decent photography set up - I need somewhere permanent, lord only knows where that will be though.
Anyway, just the one photo (i.e. the only one that came out OK in my last session):
Queek Headtaker 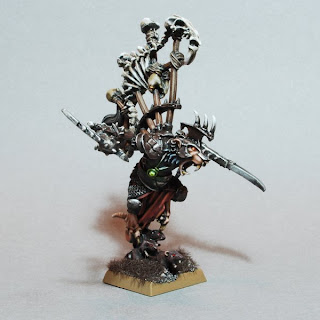 Pretty pleased with the paint job, hopefully some better photos should show him off better.  I went for metallic armour rather than red, as I didn't like the bright red armour on the GW paint job - this feels a bit more Chaos ratmen to me, although not quite so distinctive.  The warpstone pendant worked well too, might need a bit of work, but the OSL's not too bad.
The other miniature completed this week was a quick and dirty Warg rider for War of the Ring, 3 more of those to go...
What would people like to see me do next? I'm really open to ideas - my next post will be about an autumnal themed Eldar army that I have an idea for, but after that, who knows?
Posted by Unknown at 21:26 4 comments: