There's been a bit of a gap between posts, apologies for that, but there's a very good reason, which hopefully will be revealed soon...
But in the meantime, I've finished my first Warjack!  The pictures were taken outside for a change, I'm not sure if this is an improvement or not on my previous photos, but at least I didn't have to mess around with the lighting. 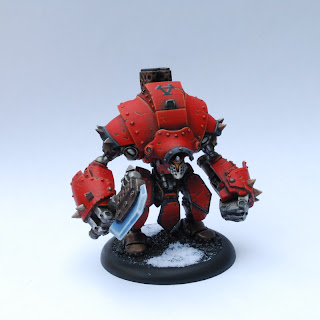 While being a royal (appropriate word for today) pain in the backside to put together, this great big lump was a blast to paint.  He's meant to look dirty and beat up, and while my battle damage needs a little work I'm pretty pleased with the overall effect.  The miniature is "zenithal" highlighted (I think that's the term, I pinched it from Ron at From The Warp), i.e. the light source is imagined directly above the model, so all the lightest parts of the model are the elements/sides facing up
Red Flag Flying
Red is not a colour I enjoy painting large blocks of, as in the past I've had issues with getting the transitions smooth.  I'm probably a little hamstrung to start off with as I undercoat with black, but I think it's worth the extra effort in the end. The current method I'm using seems to be working and although the red is a little brighter than I'd intended, I'm going to stick with it for my Khador force. 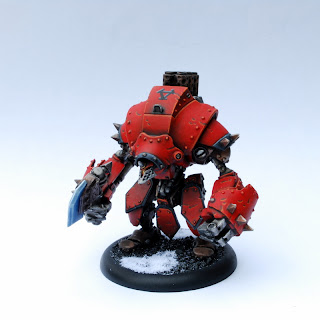 Stage by stage, it goes a little like this:
The battle damage is then applied to the armour plates: 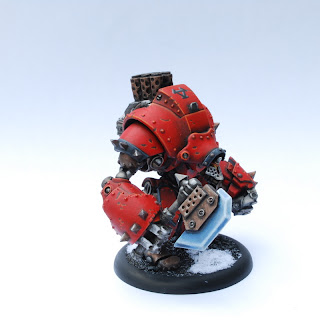 This gives the illusion of a pronounced edge to the dent.  I prefer this to carving dents and scratches into the model as it's easier to erase mistakes if you've done too much, or put it in the wrong place.  Once the damage was completed, a glaze of Baal Red is applied to tone down the colour of the armour.  If I'm honest, I could have done a better job of the damage, making the dents/scratches smaller and more numerous, but I'm still quite pleased with the way it came out.
Heavy Metal
There's a whole load of "metal" on this model, which was a lot of fun to paint.  As this is a steam powered piece of machinery, I wanted to make it look dirty while still having some shiny bits. 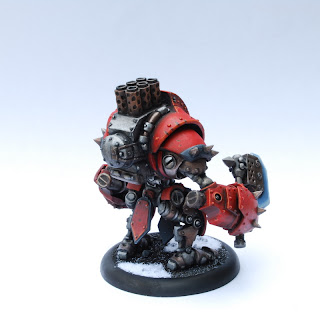 For the steel:
For the bronze/copper:
By using a flat rather than metallic base coat, the recesses look dirt filled, especially with the amount of Devlan Mud used.  By going no brighter than Chainmail (or a Chainmail mix), the metal areas aren't too bright, helping to add to the effect. 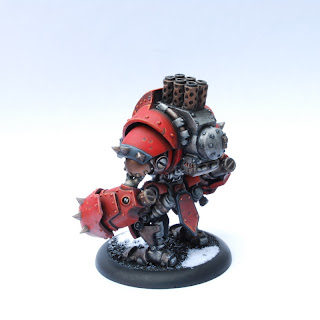 The Devil is in the details
After the major elements were completed there were a few other things that need finishing off.  The black trims and the Khador emblem were simply a Black undercoat which had Adeptus Battlegrey and Codex Grey blended in as highlights. 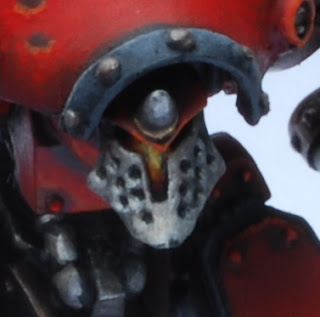 A glimpse of flame was added to the grill of the furnace.  The holes here were filled with Scab Red, then Blood Red and Solar Macharius Orange were added in smaller layers, brighter towards the bottom.  A similar effect was used in the face plate of the 'Jack, but with a final layer of Sunburst Yellow added to the centre.   I went a bit literal with the "Ice Axe" - plain metallic steel didn't feel right to me, so after a base coat of Boltgun metal, I added layers of Necron Abyss, Shadow Grey, Astronomicon Grey and then a final highlight of White mixed with Mithril Silver to give it a frosted metal look. 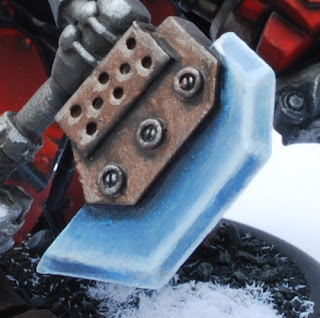 The base was then done to match Sorscha, and a spray of Humbrol Matt Varnish finished it off.
So one down and one to go.  Now I know what to do with these bad boys, the Destroyer should get done a bit quicker, then I need to decide what I want to go with them - with a new store in Swindon opened, called Gamecraft, that sells Warmachine, this maybe sooner than I'd planned...
I've got a couple of miniatures lined up to do this weekend, hopefully I'll have some daily progress reports as we're in another 4 day weekend.
As always, comments and criticism welcome!
Posted by Unknown at 18:13 6 comments:

Hmmmm, an oddly "Assassin" themed couple of weeks for me.  I managed to complete the first Assassin's Creed (if you're not a video gamer that might not have meant much to you) last week and have just started the second one, which ROCKS.
Added to that, alongside a couple of painting projects I've got on the go, I completed this chap (still a lamp short at the moment, so apologies for the pictures...): 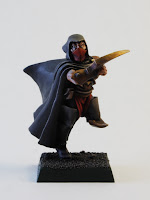 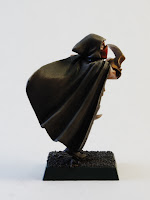 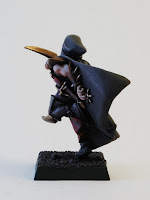 Acting on Pete's good advice the turquoise was dropped  in favour of the leather looking colour (and gold for the knee spike) which definitely works (cheers mate!).  The cloak was built up from Chaos Black through Charadon Granite and finishing with Dheneb Stone, which although not traditionally dark enough for a dark elf assassin has worked out rather nicely..  The leather pieces started with Scorched Brown and blended in with Tausept Ochre as the top highlight.  It's a nice dynamic miniature that was actually fun to paint, and he would work well as a Blood Bowl player too!
My Dark Elf army now consists of 7 miniatures, good going for me...
In other news the owner of the Eldar Bonesinger was very pleased with the paint job I did for him, which was very rewarding.  I'm giving some thought to doing it as a little side line to make some extra cash, I just need to work out if I have the time...
The first Warjack is still ongoing, the good news is I have a red recipe I'm happy with, so hopefully he'll be done by next weekend
Posted by Unknown at 21:56 2 comments:

Not too much going on this week, a couple of projects ongoing, but nothing that I can share yet.  My first Warjack is proving to be a bit of a pain, but I should make some progress on it this weekend.
While my motivation is at a low ebb, I had a crack at this chap: 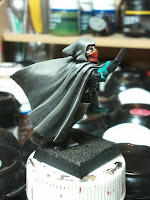 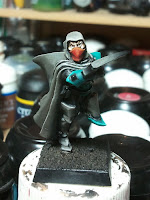 I'm not happy with the turquoise, I think I'm going to get rid of that on all my dark elves and replace with something more appropriate - any suggestions?  I'm happy with the cloak and the face, I've gone for a paler skin tone on this chap, and I've just noticed I've forgotten to do the eyebrows...
Comments and criticism welcome!
Posted by Unknown at 21:44 4 comments:

I've just finished this miniature for a friend who's using it in a doubles tournament somewhere.  Apologies for the quality of the pics, I had "light" failure - one of my lights fell over and the bulb went... 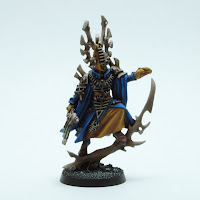 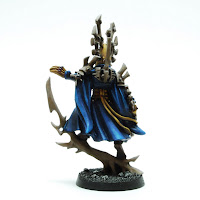 This miniature was actually quite fun to paint.  I had serious "painters block" after doing the blue, but once I got past that, the wraithbone and yellow were quick and easy.  I stuck with a pretty limited palette, which I think works pretty well.  He's a bit more colourful than my usual style, but I painted him to fit in with someone else's army this time.
One thing I am pleased with is the weapon/instrument/singy-thing (no, I have no idea what it's called...): 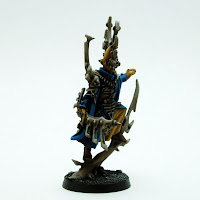 I'm not sure if it shows up on the picture that well, but I used glazes of different colours so that it wasn't all bone-coloured - I tried to go for a more subtle effect, rather than strong colours - diluted GW washes are fantastic for this effect, and you can be controlled with them even in diluted form to give you a graduated look.
...and now I have to give it back to someone, rather than keep it myself and stick it in the cabinet, which is nice in that someone will appreciate it and use it, but it's a bit of a wrench to let go.
As always, comments, questions and criticism welcome!
Posted by Unknown at 11:29 No comments: