The Toad of Truth and a Demonic Hoodie

A few odds and sods (literally) this post.  First up are the two demonic familiars from Heresy that I purchased  back at Salute.  I've named this ugly little fellow "Scrat": 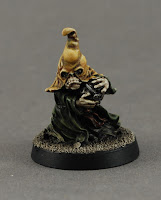 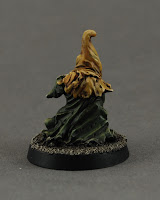 He's painted to fit in with any evil/chaos/nurgle/necromantic warband I could think of, so intentionally dark and dirty.  I basecoated the whole model all at once, and then washed the whole lot with Agrax Earthshade - it's a lazy way of doing things, but it got the result I was looking for.  The flesh was a base of Rakarth Flesh, highlighted with the base coat and Pallid Wych Flesh - the Earthshade wash gives it a nice grey-brown tinge, like something just this side of the grave.  The yellow was my usual Tausept Ochre base, but with the darker wash, and highlighted with more and more Rakarth Flesh.  The green is the same old method with Castellan Green, Death World Forest and a little Karak Stone.  Here's Scrat with Garg as a size comparison: 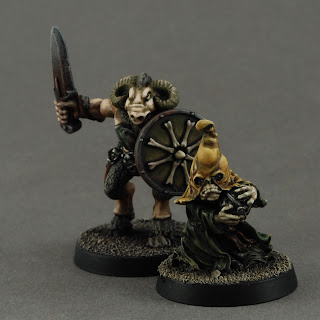 He's maybe a little big to be a familiar, I like to think of him as an Evil Sorceror's lackey...

Next up is the "Toad of Truth": 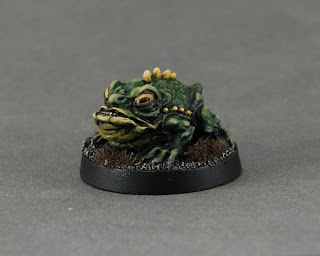 Fans of the quite fantastic "Big Bang Theory" (a big favourite in the Walker household) may recognise this as a quote from Sheldon Cooper, which was the start of an in-joke between a few of us in our little gaming group, so once I saw this miniature at Salute, I had to get my hands on it! 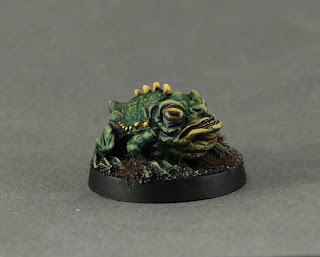 Very similar colours to Scrat, the major difference was that I used Kislev Flesh rather than Karak Stone to highlight the green, with a lot of the flesh tone added for the mouth and throat.  I've seen "human" flesh tones used to effectively highlight Orc/Ork skin, so I thought I would give it a go here, and I'm really pleased with the effect. As an additional little detail, I gave the eyes a coat of gloss varnish to finish him off.

Both of these Heresy sculpts are lovely miniatures with HUGE amounts of character, they were loads of fun to paint, and I can't recommend them highly enough.  Also, they've got me back on track to get everything I bought from this years Salute painted before next year's Salute, AND with two miniatures down, it means I have space for two purchases...

As always, comments and criticism welcome!
Posted by Unknown at 22:55