Over the last few weeks, when I've had the spare time (what's that again?), I've been working on my Kingdom of Britannia army for Dystopian Legions.  I did 3 of the troopers for my last Ancible article (if I can get permission, I'll repost the article here), so to keep the motivation up, I went for a few of the more interesting miniatures in the box. 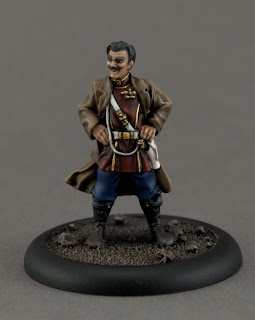 First up is Major De'Ath (anyone who follows me on twitter would have seen this picture a few weeks back).  The Spartan studio paint job has him in different colours to the rest of the army (an all blue uniform with black webbing), but that didn't really work in my opinion, so I used the standard uniform colours, with some gold trim. 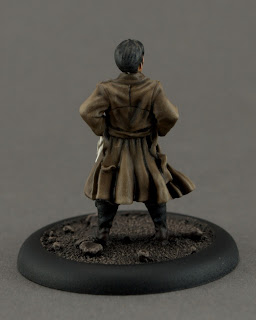 The coat is the most obvious different bit, to the standard trooper, and it's a simple process - a base coat of Steel Legion Drab, shaded with Army Painter Strong Tone, then highlighted with the base colour and Karak Stone.  I think I mixed in a little Rakarth Flesh for the final highlight.

Here he is with the 2 of the original 3 troopers I painted for the magazine: 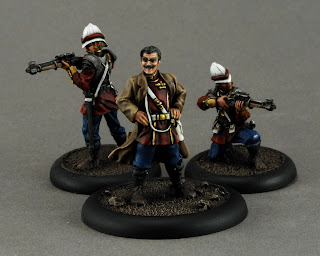 Major De'Ath is named after a kind old gentleman who used to live next to my grandparents, who actually was a major in the army - a pretty good name I think...

Next up are two of the Sky Hussars: 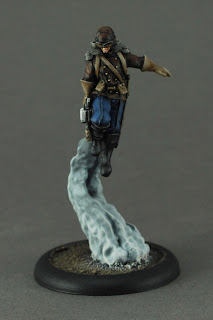 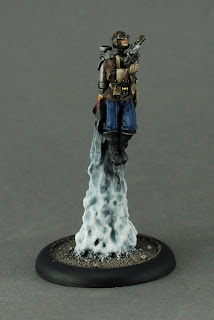 The idea was to paint these quickly, but me being me, that never happened, and so they came out much neater than I thought they would.  I ditched the red jackets in favour of brown leather - these guys reminded me of "The Rocketeer" (a Disney movie I think) and "Sky Captain and the World of Tomorrow" so I wanted to capture that look.  I left the trousers blue, so there was still some continuity with the rest of the force.  The brown was pretty simple, a base of Rhinox Hide, washed with Agrax Earthshade, and highlighted with the base colour, then Mournfang Brown and then a little Deathclaw Brown mixed in.  The webbing and gloves were done using the same method as for Major De'Ath's coat. 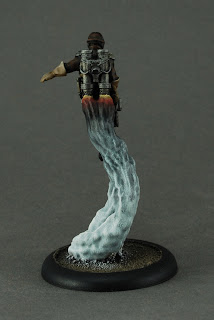 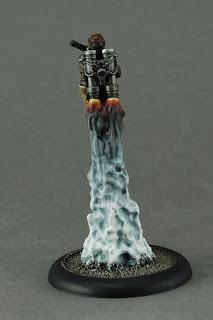 I'm pretty sure anyone using these rocket packs would get their arse burned, but let's not worry about that.  The rocket packs are simple metal, with some different coloured washes applied in places to stop them looking bland. and the "flames" were a simple transition from very pale yellow, through orange to red and then black - I don't think it matters too much which paint you use, just trying to get the blending as smooth as possible is the important bit.

The smoke was an interesting experiment.  Initially I tried base coating with the old Adeptus Battlegrey, washing it with Nuln Oil, then highlighting with progressively lighter colours the closer I got the ground.  This didn't look right as the near black shadows didn't work with the white highlight at the bottom - it just didn't look like rocket exhaust smoke.  The solution was this:


The base coats were roughly blended into one another, and the highlights were heavily dry brushed on, making sure there was some overlap.  I also gently dry brushed some of the base texture at the bottom of the smoke to give a hint of it dissipating.  I'm really happy with the way this has come out, it actually looks like smoke!

Just to finish off, I've been using GW Lahmian Medium quite a lot recently, and it's really helping with blending, I'm using it in addition to the water as a thinner (more medium than water most of the time).  Mixing a little in with the base coats and washes, it keeps everything nice and matte too - definitely recommended!  I'm going to be trying out Vallejo glaze medium to see how that compares too in the very near future.

My plan to only buy a number of miniatures equal to what I've painted beforehand is about to get blown out of the water, it looks like I'm getting into Drop Zone Commander...

As always, comments and criticism welcome!
Posted by Unknown at 21:12