Bones and a Beastman

In the last ever issue of the Ancible, I wrote an article reviewing a Reaper Bones miniature.  For those unaware, Reaper are reissuing large swathes of their range in white plastic, making them much cheaper and supposedly easier to work with.  In the article I expressed the concern that this new material was a softer plastic than we've come to expect from GW, Privateer or Mantic, and is prone to bending.  On a recent trip to London, I popped into Orc's Nest and they had a good range of the new Bones line - so I picked up an Ogre (one of their original, pre-kickstarter Bones figures), and Michelle the Human Ranger character. 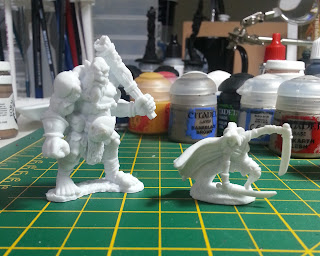 At £2.50 each they seem good value, especially for the ogre - he's a little flexible but nothing much to worry about.  Pinned to a 40mm base, he'll be sturdy enough.  I guess Michelle is still good value for £2.50, but the arms and sword blades would have been enough to make me balk at buying her in plastic form had I known previously. 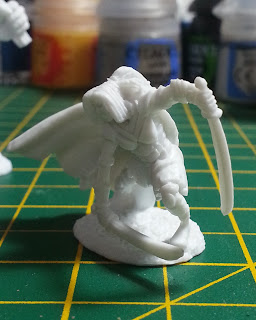 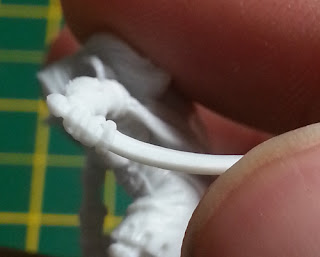 In the first picture you can see there's a little bend in the sword blade anyway, but as demonstrated inexpertly in the second picture, even a little pressure causes everything (sword blade and arm) to bend alarmingly.  I'm not convinced that the paint will bend as much without some cracking, but I'll put some paint on her this weekend and we'll see how it goes.  I'm tempted to replace the swords with some old Empire swords, but that won't stop the arms flexing.

The Bones kickstarter was really successful, hitting quite a few stretch goals - were people aware of what the miniatures were made of before they pledged?  This would have been an absolute deal breaker for me, and I'm a HUGE fan of Reaper miniatures...

I've given myself a new rule - I'm not allowed to buy a new miniature until I've painted one I already have.  Therefore my lead/resin/plastic mountain doesn't actually increase, and it's some extra motivation to get stuff painted.  One of these completed miniatures is an old Marauder Beastman: 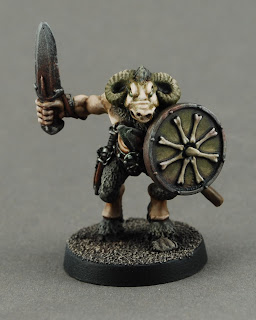 "Garg" is not the most dynamic of figures, and he's quite obviously a Marauder sculpt rather than a Citadel one.  He's on a round base, as he'll be another member of a Nurgle(ish) warband for whatever skirmish game I might end up playing. If this plan falls by the way side, it will be relatively easy to transfer him to a square base if needed.

It's a quick and dirty paint job, with P3 Beast Hide, Stormvermin Fur, Dryad Bark and Deathworld Forest providing the majority of the base coat.  The metals were dry-brushed onto the Dryad Bark, splotched with Chestnut Ink, and then dry-brushed again. 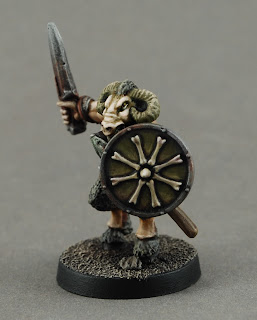 The shield is another Marauder product (Marauder shields were the business back in the day), specifically an Undead shield, but I think it works well for a Nurgle Beastman.  The green was shaded with Agrax Earthshade, and then highlighted with the base coat, and then mixing in more and more Karak Stone. 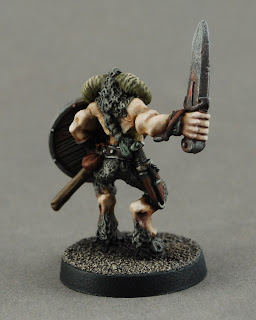 The skin was washed with Seraphim Sepia, and then highlighted with the Beast Hide, and mixing in more and more Rakarth Flesh. Across the model I glazed on a little Druchii Violet in places to mix up the colour a little, and then gave the whole model a very, very light dry-brush of white, just to pick out the top edges.

His brother Harg (another Marauder sculpt) will be started soon, alongside the first two of my Salute haul.  I'm well behind on my plan to paint up everything I bought at Salute, so I need to pick up the pace...

As always, comments and criticism welcome!
Posted by Unknown at 23:01