Not much to report this week, a little purple on the head and right shoulder, but the main thing is the crest, which I think has come out pretty well: 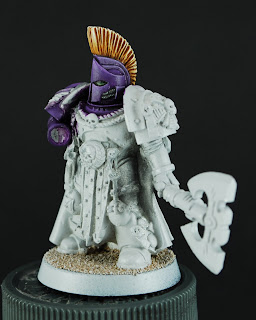 As I'm slowly migrating to the new GW paint range, so Breviccus Flavus is evolving.  The yellows are the same (Tausept Ochre and Iyanden Darksun), but now the shade is Seraphim Sepia, and the top highlights include Rakarth Flesh, and then some white to finish off.  While I've found Nuln Oil, and to a lesser extent Agrax Earthshade, to be a regression from Badab Black and Devlan Mud, Seraphim Sepia is a definite improvement.  It covers better, and it's a stronger colour in my opinion. 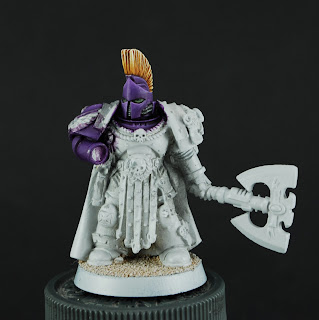 The purple is coming on nicely, it's a base coat of the new Xereus Purple, shaded with Druchii Violet, then highlighted up through Xereus Purple and Genestealer Purple, with the final highlight a 1:1 mix of Genestealer Purple and the old Astronomican Grey.  It's not the Hawk Lords purple of the Codex, but it's a colour I'm happy with.  Since these pictures, I've started to work on the gold on the "started" shoulder pad.

Another miniature in my "to be finished" group has been completed: 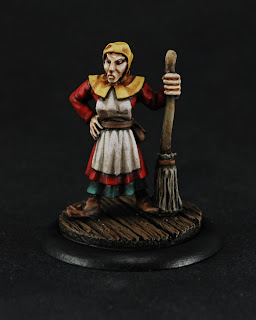 This lady was a present for one of my best friends, someone who through her hard work, experience and knowledge literally keeps the department she works for going.  There's a bit of an "in joke" between us about brooms, so this miniature seemed very appropriate.  :)

She'd actually had a bit of a mishap (mantelpieces are dangerous places), so I was repairing her, and decided that re-basing would be a good idea too.  She's a very old miniature, made by Marauder (remember them?) way back in the late 80s - I finally found her on Stuff of Legends.  To give her a bit more stability, she's pinned and glued to one of Dark Templar's Malcontent bases.  Painting wise, the yellow and red are my usual way of doing things, but I can't remember how I did the green, so it was just as well I didn't have to repair the skirt at all...

She's now back with her owner, who is very happy to have her back and has a safer place to display her!

In other news, several of the Ancible team got together at Firestorm Games in Cardiff - we had a very pleasant day, and Firestorm is a great place.  Unfortunately, my Crimson Fists got their arses handed to them on a plate...twice.  After a lengthy period of reflection (I was a little grumpy with myself I'll confess) I have a reasonable idea why, so steps are in place to get them a bit more competitive.

As always comments and criticism welcome - I've been out of the loop a bit recently, but hopefully will be back in the loop over the next few weeks.
Posted by Unknown at 22:53