To go along with the Sabres from last post, it's the turn of the Falcons to get some paint.  My small force needed two Falcons (they're the UCM version of present day Apache helicopters), but even two tested my batch painting skills (or lack of them). 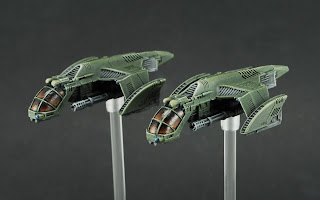 OK not really, they were so quick and easy to paint, I got both done in an hour or so, while watching football!  They're tabletop standard with dry-brushed highlights, and like with the Sabres, the small scale, and large number of hard edges on the models means dry-brushing really does work well.  They were painted in pretty much the same way as the Sabres, so a quick recap: 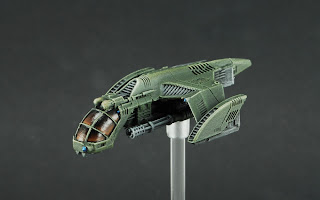 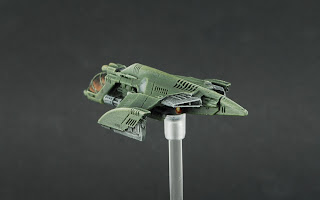 Once the grey was finished, I gave the top of the model a very light dry-brush of Pallid Wych Flesh to pick out the top edges, and coloured in the insides of the engine exhausts with orange and a dot of yellow. 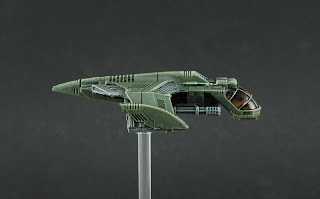 The last thing to do was the pilots canopy.  I wasn't a big fan of the way the Hawk Wargames guys did theirs, so I tried to go for a dark, orange lit effect.  I used a base coat of Abbadon black, then quickly blended in some Rhinox Hide, then mixed in more and more Squig Orange towards the bottom of each pane of the canopy. 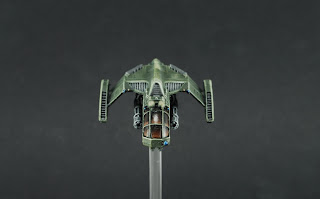 After, I'd sprayed the model with Dullcote, I went back and painted the canopy (sans frame) with GW 'Ardcoat to give it the glassy look.

...and they're done.  The group of reprobates that comprise our gaming group will be at Colours in two weeks time, where I will pick up the rest of the miniatures to make up my force (or I'll buy the two person starter box if it's out, not sure which yet).  My current force list comprises:

This list was created using the very nice force creator app that can be downloaded from here: http://www.dzc-ffor.com/. 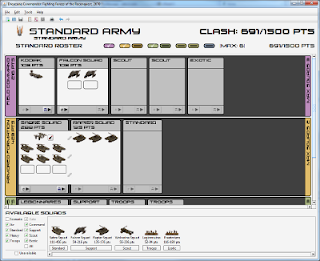 (Image taken from the link above)

It's really easy to use, and if you hit print, it will print out the force list, stat sheet, model listing, and a shopping list (if you remember to fill in the database of what models you already have)!  I'm a huge fan of this application and there are a few other companies that could really learn from this.

In other news, I backed the ArcWorlde Kickstarter from Warploque miniatures.  I don't usually do the Kickstarter thing (and I'm very glad I skipped the Reaper Bones one), but the miniatures really appeal to me, and it's nice to support a smaller company.

My apologies for not being active in commenting on other people's blogs, I've recently started a new job at my company, which has been a bit nuts (I guess that's what I should expect when I get promoted), and I've had a load of DIY to do, plus attending this years Fforde Ffiesta (a small literary festival dedicated to the works of Jasper Fforde).  I do however read everyone's blogs that I follow, and you are all doing some fantastic stuff, and given me a lot of inspiration to get on with my own painting.  Hopefully (he says with no confidence whatsoever), I should have some more time to both post and comment now things are starting to settle down.

I seem to recall saying that before...

As always, comments and criticism welcome!
Posted by Unknown at 21:47